These are just a few the encyclopedias we have in the HPU Libraries, related to World War One.

This is a small sample of the books we have in the HPU Libraries related to World War One. Ask us for help to find other titles!

- Provides easy access to over 400,000 digital items, from the national collections of eight countries, including the USA. Contains letters, photos, keepsakes & film materials.

Library of Congress: “A Guide to World War 1 Materials”

- This site contains a wealth of photos, period sound recordings, essays, bibliographies, timelines and links to many other collections

Imperial War Museum: This UK museum is a repository for hundreds of thousands of physical artifacts relating to war, including uniforms, medals, weapons, airplanes, etc. Also they have many thousands of photos and paintings, as well as personal memorabilia, such as post cards, letters, diaries, etc.

Use the following databases to search for materials: 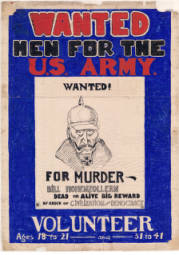 Most catalogs and databases use the following subject term for WWI searches: World War, 1914-1918. Add terms to this to further narrow your search.