World War One: Peace is Lost

THE PEACE IS LOST 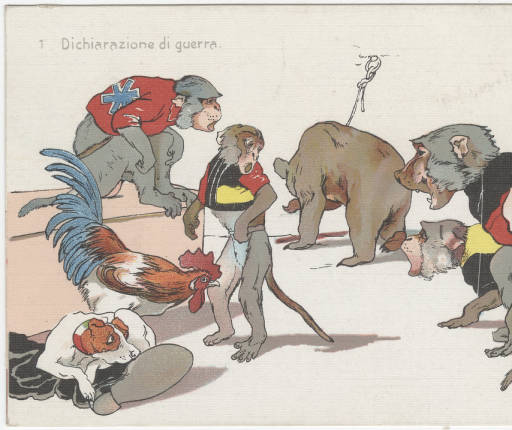 Margaret Macmillan in her book, The war that ended peace: The road to 1914, writes that the First World War only started because the peace was lost and that war was not inevitable in 1914. Christopher Clark in his 2013 book, tracks this idea, by suggesting that Europe “sleep walked” into war.

A naval arms race had begun at the end of the Nineteenth Century, with Germany trying to build a bigger and more modern navy than that of Britain. This had the effect of encouraging France and Britain to collaborate in series of political arrangements, called the Entente Cordiale. This was not the outcome that the German Kaiser, Wilhelm II, had foreseen. The French, wanting to protect their eastern borders from invasion by the Germans, encouraged the Russians to join their alliance with England, so forming the Triple Entente. An equal and opposite Triple Alliance developed comprised of Germany, Austria-Hungary and Italy.

Italian postcard (1914-18) showing a group of animals, each one representing a different European nation. Two German monkeys on the right scream at two other monkeys (Belgium & England), a rooster (France) and a dog (Italy). A bear (Russia) is chained to the wall.